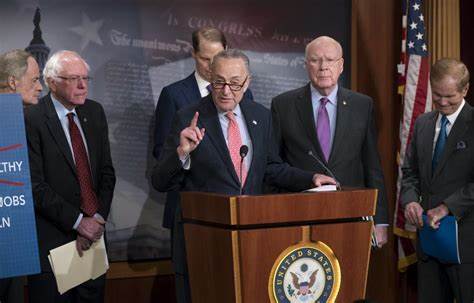 There has been little focus on if the current field of democrats plans are affordable. We do some analysis to see if the predictions of cost, affordability and effective tax rates hold water.

This article was originally written November 3, 2019

I have not written any articles for the past few years, as I have been focused on my other endeavor, Healthcare Reform 2.0 (www.hr-20.com). However, as of late, the over-the-top rhetoric of the people running for president on the democratic side has begun to disturb me due to the lack of anyone questioning the cost and affordability of these programs. So, I decided to take some time and investigate for myself.

“Please note, I am not trying to be partisan or express a hard right-wing conservative view here. I do have more conservative views than liberal when it comes to fiscal issues, but from social, programmatic areas, I tend lean more liberal.”

Like most of us, I have been listening to the expanding promises of the democratic parties running for president and have become more and more dismayed by the lack of anyone taking a real hard look at the cost to each of us, as working, Tax-Paying, American households. I am not faulting these candidates for their zeal and ideological goals; I am finding their arguments to explain the impact all of their programs will have on each of us. My question is, “could these programs actually be paid for in the manner they suggest?” Further, before I embarked on my own analysis, and based on my experience doing my cost analysis of the Affordable Care Act, that I was able to predict quite accurately, the sheer incredulity of their statements as to who will be harmed and who will benefit have been quite astounding in their underestimation; not to mention the potential negative effect on the economy due to job loss, loss of international competitiveness and many other factors.

I took the past week to dig deeper into the costs of the programs outlined. Granted, some, maybe even many, may not be the final planks of the platform of the selected democratic presidential candidate. Still, at this moment, there is little reasoned push-back on the drive to implement these goals they claim will benefit a little more or less than 50% of America (this percentage amount is guesstimated based on whom they say they are targeting to bring help to – a number that as you will note in the downloadable worksheet is likely vastly over-inflated.)

I am sure some parties will immediately say the analysis is unfair or invalid for various reasons. As I said, this is my analysis based on about a week’s worth of reading, research, and analysis. I freely admit that I can be wrong. If so, I am willing to share my spreadsheet, and you can then modify it to make your own analysis. In the words of Billy Joel, “You may be right, I may be crazy, but I just may be the lunatic your looking for!”

Screen Shot of Program Analysis Worksheet. If you would like a copy of the analysis spreadsheet for your own analysis, send me an email with your email address using the form at the bottom of the article.

The following is a summary of the findings I have based on my independent, simple analysis. In these analyses, I am not adjusting for the continued spurious printing of new money (due to dilution of the dollar and inflation), nor am I factoring in any effect of potential positive or negative changes to the economy. Although I suspect these programs, and their respective costs, were to come to pass, the economy will be very severely negatively affected, and all bets are off that even the bad numbers will look this good.

Here are the basic assumptions. They have been run from a best-case – worst-case perspective. The best-case is what the various party pols are touting as their plan(s). The worst-case analysis is based on an outside parties assessment – one that I believe is somewhat fairly derived (in other words, if it’s nothing but pure bias, I did not select those numbers).

The programs I used in my analysis are:

I am using recognized sources for the current census projections of the following;

This is a $54 trillion deficit

So, in conclusion. This is my analysis, and I am NOT presenting it as an indisputable fact. I am trying to get you, the reader, to take a hard look and use your education and simple math skills – or my spreadsheet – to look at the effect anyway you want. Google and Bing are wonderful tools to find the numbers that you think are most likely. I hope this is somewhat helpful.

PrevPreviousS2E9 Healthcare is Hostile
NextWhy I am Who I amNext