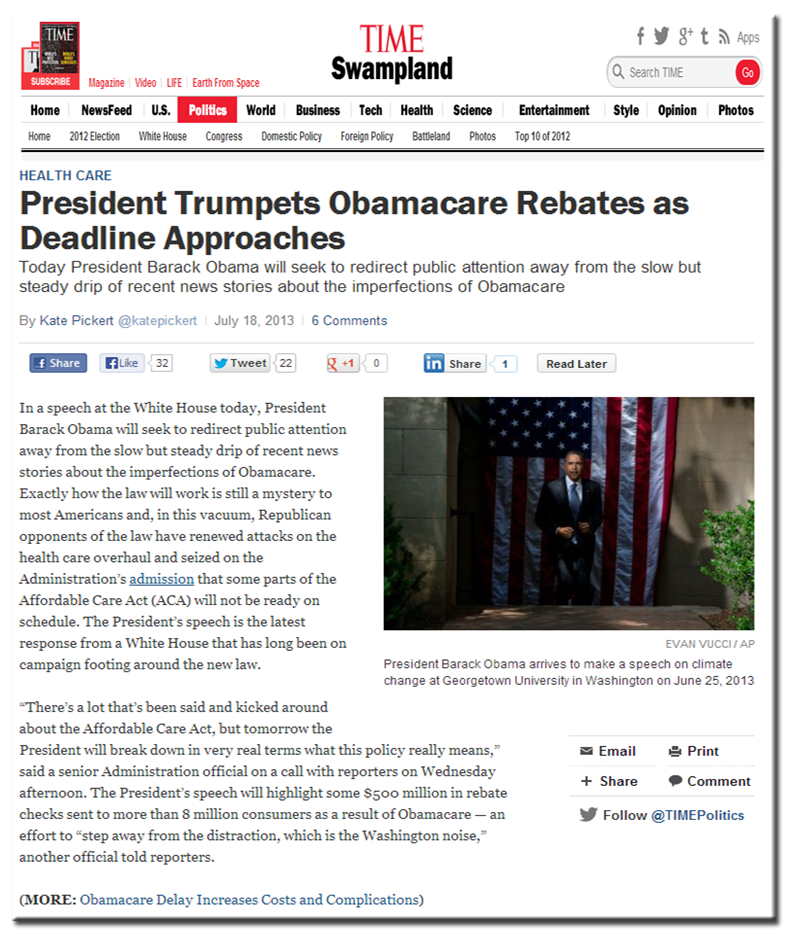 Obamacare has now been with us for a while. Did the rebates do any good? You be the judge.

“Naught from the Greeks towards me hath sped well. So now I find that ancient proverb true, Foes’ gifts are no gifts: profit bring they none.” So observed the great philosopher and teacher Sophocles about 430 BCE.  Today we loosely translate this as, “Beware of Greeks bearing gifts!”

No quote could be more apropos concerning the supposed $500 million in insurance rebates sent to 8 million Americans under #Obamacare. Like most Ponzi schemes, this appears to be a great deal for America and Americans at first blush. But like all Ponzi schemes, looks can be deceiving. One thinks that if I pay $795.00 for a beautiful flat-screen TV and I then qualify for a $100 rebate, I got a better deal because I paid a final price of $695—saving $100. Wow, that’s such a great deal.

But is it really a great deal? Or is it merely a device to incentivize me to buy on an artificial timeline, i.e., today, because a great deal will go away if I don’t act? The answer is yes, of course; it’s a deceptive device and affectation. The reality is the manufacturer was willing to sell the TV for $695 all along. He practiced a marketing ploy, long known since the ancient Greeks, ‘Markup to Markdown!’  In fact, he was both willing to sell it for less and very happy to charge more and pay the rebate because he knows that not everyone will go to the trouble and effort to collect the rebate.

About 1/3 to 1/2, sometimes much more, will never collect the rebate, so in the end, the manufacturer will pocket significantly more profit.  This is a good thing because the manufacturer also has to pay people to process these at, or after, sale rebate claims, and of course, that increases the cost of the sales and support of the product in the first place.

In reality, the manufacturer is willing to sell the same TV for $620. That means we all, in effect, actually paid more than we needed to.  In effect, we have to pay more so we can believe we are actually paying less!   Just like most of the policies from our #ObamaNation, this is nothing more than income redistribution. There is no such thing as something from nothing. This leads us to the discussion of the insurance rebates now mandated under #Obamacare.

Our Federal ‘Giverment’ has long mandated that rebates be paid back to various federal ‘giverment’ programs for drugs purchased and dispensed by those programs.  Many years ago, the states also got in on this act, and now a huge part of the price that is paid for every drug is actually nothing but funny money that gets paid at the time of purchase, flows to Pharma, and then flows from Pharma back to the various ‘giverment’ programs.  In a few cases like California, almost all of it flows back into the funding for the very same programs that paid for the drugs in the first place. In many other instances in other states, this is not the case at all.  The money—significant amounts of it—flows back to the states and the feds into their general funds or other un-restricted line items, and goes to pay for just about any other thing they can think of, sometimes not related at all to healthcare.

To get a handle on the size of this problem, let’s take a straightforward look at the California AIDS Drug Assistance Program (ADAP). This program is in part funded by the federal ‘givernment’s’ Ryan White Care Act (which requires federal rebates to be paid to the Feds and also rebates to be paid to the state programs.  How significant are these rebates, you may ask?  Let’s take a look.  In 2009, California paid out about $500 million in drug costs to provide free or heavily subsidized medications to eligible Californians living with HIV/AIDS. About $250 million of the funding came from rebates received directly from Pharma or indirectly from Pharma flowing through the federal Ryan White Care Act back to the states.

But isn’t this a good thing, you may ask?  Well, NO, would shout Sophocles! Then he would say, you just are not paying attention, are you!  You see, the money for the rebates does not come from pharmaceutical company’s pockets.  Yes, they do pay this money from their accounts, back to the various ‘givermental’ programs, but the money comes from us in the first place.  It is a simple shell game. They just ‘Mark up to Markdown.’

And, it’s not just these government rebates that are in play; there are rebates to pharmaceutical distributors, there are rebates to pharmacists, there are rebates to large purchasers like hospitals, and some others.  When you start to add up all these numbers, now you will find why the pill of aspirin you can buy in a big bottle at retail for just a few cents can cost $4.00, or even more, if purchased in a hospital or through one of these programs.  The money flows from the inflated pricing back to Pharma, who then dutifully, often by law, pay it back to the various ‘giverments.’  And the ‘giverments’ have what amounts to a significantly large and largely hidden source of funds that obscures what is actually going on and what they do with it. It has gotten so out of hand in the past few years that even the pricing of the drugs in the programs is constructed, so at no time is the “retail” price of the drug ever discernible.  Pharmacists that provide medications to eligible patients under the program seldom know what the drug actually costs. They get paid through a staggering array of rates, including flat-fee payments just to fill the prescription, and then payments for the medication based on some discounted percentage of the average wholesale price (AWP) or a discount from the Wholesale Acquisition Cost (WAC) or some other equally arbitrary or specious calculation. And the discounts paid to the pharmacist can be on the order of 68% off of the WAC. WAC for sure, the whole damn system is WACked! Oh, yea! Even if all these back-end schemes were not going on, someone still has to be paid to process all the paperwork, review all the claims, and the Federal ‘Giverment’ is going to hire thousands of administrators to go audit and oversee all of this processing. And where do you think the money comes to pay for that?  All of this, directly and indirectly, drives up the costs and creates an entirely false economic system in which no one can fathom what something costs, nor what they will ultimately get paid or has paid. We claim that we spent $2.9 trillion on healthcare in 2012. Not hardly! We actually really spent significantly less. Maybe as much as 1/3 less.

When you look at the real pricing, not the phony rebate and other cock-a-mamie system-generated prices, and compare our system to other so-called good socialist systems in Europe, we actually are either on par or better.

So when you hear this presidential administration, the #ObamaNation, say today that #ObamaCare has paid out $500 million in Rebate checks to 8 million Americans, just remember what old Sophocles said in 430. BCE and “Beware of Greeks, or geeks, bearing gifts!”

All in all, Rebates are one of the big contributing factors as to why healthcare ‘costs’ so much in America and make it such that we really do not know how much healthcare actually costs!