Semantics: Its just not for politicians anymore.

Semantics: Word games – we all love to play them. On occasion, it is fun to pit one’s intelligence against another and use words to obscure what we are saying or twist another’s words into something they clearly would never have said. But it has, as an intellectual challenge for some, become a threat to our national existence? 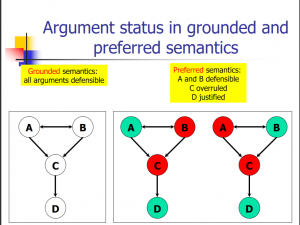 It seems the word games we all learned to play as children have become the weapons of war on ourselves, wrought by others for their own gain and power. The diatribe that is now offered as debate in all phases and venues of our public discourse – from the popular media to the halls of our congress (once the proud battlement of high ideals and lofty goals) has become a bitter, petty and self-serving process. Its practitioners now use language to obfuscate, confuse, deflect, disguise, denigrate, excoriate, and disrupt anyone and anything, usually pursuing goals that no clear majority would support.

As a result of this semantic game, we have lost connection with the little engine that made us that little engine that could for over two centuries. By using words to cloak and obscure the faults in our economic systems, created by years of short-sighted decisions and weak temporary corrections, the economic crisis some have long predicted appears to be on our doorstep at last. But unlike 70 years ago, the “our” is no longer the American “our.” It is now most of the world’s “our!”

A reader commented – without the government subsidizing this purchase, regardless of the long-term economic sense of the investment, the industry would not exist… 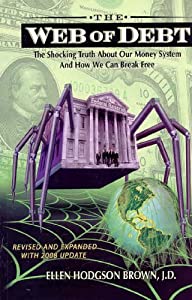 In 2007, Ellen Hodson Brown, J.D. published a book titled “Web of Debt.” In it, she chronicles the rise of the fractional reserve banking systems, how this historical standard architecture was flawed, and how we could expect to see evidence of its predictable mathematical failure. This book is an excellent read, whether or not you are an economist or even mathematically inclined. It will get you thinking, and whether you agree with Ms. Brown’s conclusions or not, she will help you see some things you have yet to see about one of the main processes that provide us our modern existence.

In a brief post I wrote recently relating to a local news article on purchasing solar panels for Yosemite National Park, a reader responded that I was failing to see the whole picture. He stated that, without the government subsidizing this purchase, regardless of the long-term economic sense of the investment, the industry would not exist as no one would afford the products. Therefore we would not get the benefits from them or have these options for future generations.

This got “me-to-thinkin’” as they used to say where I grew up. Is it possible that what I see as desperately flawed logic could make some sense? Even though many of my recent posts appear to be more based on our economy, what I am most focused on is our health care system or lack of a system, to be more precise.

As I researched my upcoming book, “The History and Evolution of Health Care in America: The untold backstory of where we’ve been, where we are, and why health care needs more reform,” I learned that many of the drivers of our currently unsustainable health care system have their roots in; semantic-based obfuscations, bad economic policy decisions of the past and the political fostering of the entitlement philosophy we have today.

In health care and retirement, we are now of the mind that these are our due. We believe we should be able to receive any care we want, at any time that we want, and if we can’t afford it, then the government, i.e., everyone else, owes this to us. And just between you and me – we never really can afford it, can we? I mean, with all the modern conveniences we also want; like the large flat panel, and the vacation every year, and the new car, and the second home, and for all of our kids to go to college and become doctors and lawyers; I mean it’s not right to expect us not to have these things to pay for retirement or health care later now, is it?

…have the government subsidize the cost of the product so we can buy it. Now, in a vacuum this logic can make some sense…

Thinkin’ more on this, I also believed that another flaw of this logic is the base economics of the decision itself. To recap, we can’t build the product at a price that people are willing or able to pay. Therefore, we need to have the government subsidize the cost of the product to buy it. Now, in a vacuum, this logic can make some sense. If the consequence of these decisions was not exclusionary to other things, we need then, assuming we all agreed, taking some money from each of us to pay the cost of a non-sustaining industry with the hope that it would become sustaining, maybe something we would choose to do. But we are not in a vacuum. Every decision we make in our economy to subsidize one industry is taking the monies we need for other things like health care and retirement.

Today’s larger problem is that we have inflated our domestic costs so much already; in this new world economy, few, if any, of the things we build here in the U.S. are cost-effective. Solar is yet another great example. Comparing the cost of U.S. designed and built solar panels with those made in China shows a stark reality. We are, in the long run subsidizing a business we will never gain from. This is exactly what we have been doing for the last 75 years. First Japan, then China, next Indochina, now India, we have subjugated ourselves to being pioneers in technology and letting the rest of the world dominate by base production. Their base production margins dwarf our pioneering margins. In this new world economy, we are now in competition with all others. Throughout the past 75 years, we have either lost or purposely abandoned many of the market segments that gave rise to our industrial and economic power.

So in our semantic fed delusion, first, let’s tax, or fine, some group, who we can use semantics to argue has more than us and, if possible, demonize how they got it from us unfairly in the first place. Next, since, according to the semantic, they abused us in some way to get it, the government needs to subsidize it because a different, and semantically disadvantaged, abused, and often relatively small group wants it to be paid for, at least in part so they can have it. One other key to this semantic process of entitlement is this group must be or have a semantic appeal to another group, large enough to represent a significant voting bloc.

Now, just like the Yosemite solar panels, someone, actually all of us, must pay for them. Some say, “We all pay for them!” Others say, “Oh no! We will make the ‘Rich’ pay for them!” This brings up other faults in this tortured logic tree. Whether it is taxes, fines, or fees, the additional costs reduce profits, increasing prices, decreasing discretionary spending, lowering domestic sales, increasing relative costs, lowing profits, driving down wages, and shifting higher margins to other countries’ production. This very observable and familiar Zero-Sum Game process now requires more subsidies. This progression is referred to by a very technical term (CTD), “Circling the Drain.” If you have any difficulty grasping this problem, you can go back to the beginning of the paragraph and repeat, reading until it becomes clear. For some, this clarity happens just after they hear the big flushing sound! Woooooooooooossssssshhhhhh!

As I thought more about this issue, I realized if Ellen Brown is correct, and I suspect she is, applying this logic is dangerous and fatal economically. Normally, when a government prints new money, it is not inflationary but stimulative. Historically, this new currency is offset by real work products with real value that has a lingering effect on our domestic economy.

I wonder if this new world economy, combined with our current lack of competitive margin-based productivity, exacerbated by the government’s current practice of allocating new currency to be created for non-value based activities like paying interest or for goods and services where the bulk of the effect of the capital is being transferred to those countries manufacturing the goods. These are the same countries where the components or primary materials yield high margins due to their significantly lower costs.

I am starting to wonder if this process is causing that WOOOSSSSSSHHHH’ing sound I am hearing? Or maybe it’s just the semantic wind whistling through the solar panels.

If you are starting to find the overall situation increasingly frustrating and perhaps scary come check out http://www.mugwump.co (yes that’s CO not COM)