To David Brooks: Its not just leaders its their point of origin 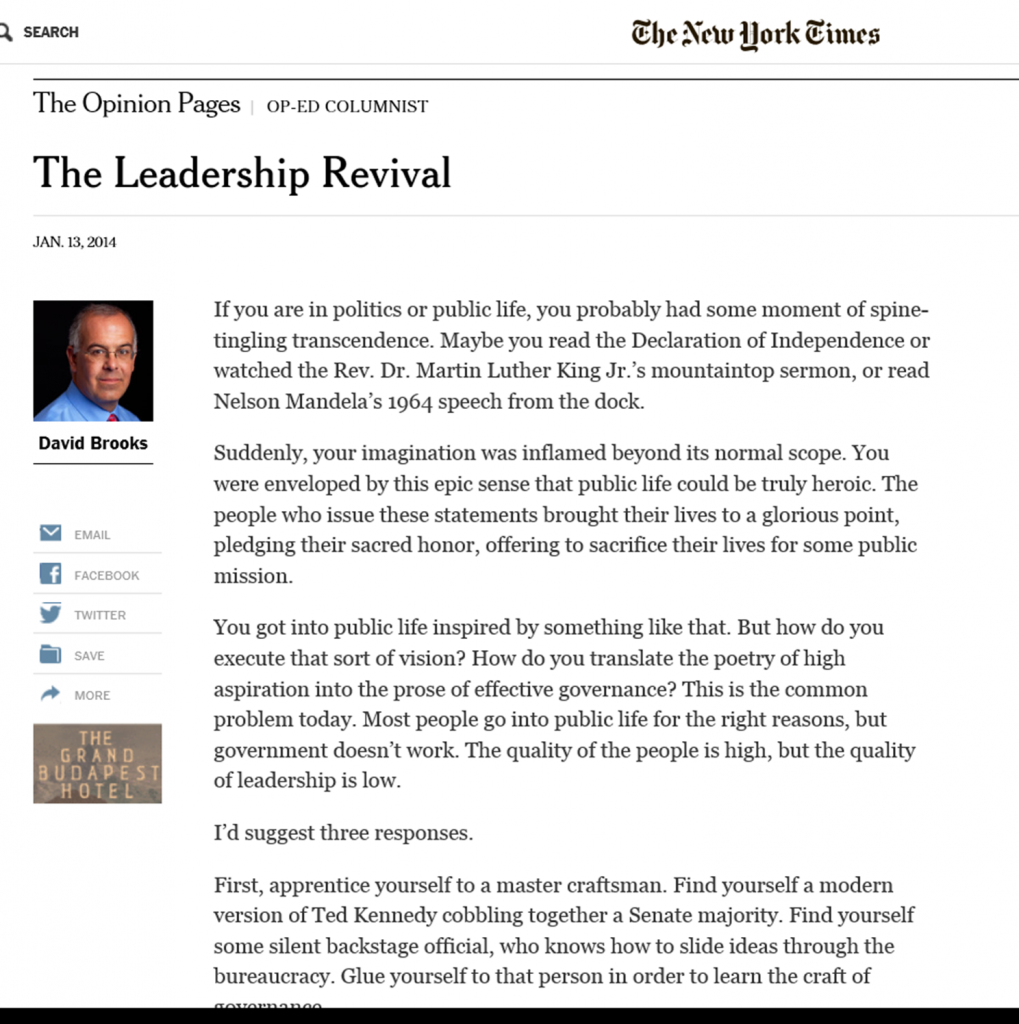 I like David Brooks! He is one of the pre-eminent writers in this era, and along with Charles Krauthammer, I try to read regularly. Always thoughtful and cogent, his observations typically are well worth reading, educational, and stimulating.

Yet, for me, in the case of his latest article, he points out something he clearly did not intend.  He frames this article with the premise that while today’s leaders may have been inspired by a defining moment of inspiration — a premise I am not sure holds very true after having met a number of our leaders in the past few years — they often lack an understanding of how to execute their inspirational vision.

In this article, David speaks to these aspiring leaders and suggests a grand discovery journey in three steps for those who want to enter politics. It will help if you read the article because, in typical Brooks fashion, he has done a masterful job and made great suggestions for those of high ideals and academic aspirations. David’s ideas are solid, and they are a valuable set of steps that anyone who aspires to high political office would be well advised to take. Still, in a rare occurrence, the article missed the mark for me. It reiterated an area where I feel we continue to misread what is needed to get back to America those remarkable men founded over 237 years ago. You see, I believe that for most of the best candidates for high political office, these steps are superfluous and a wasted effort. Why?

I believe that much of the nation does not need to take a grand journey to find grounding and pragmatic techniques to solve the issues we face.  These candidates live a grounded, purposeful life from birth.  These future leaders spend much of their day-to-day existence simply living life, surviving, providing for their family, and existing in a real, often dangerous, and difficult world. They don’t need to be reminded of the harsh realities of existence. They don’t need lessons in finding pragmatic solutions. They don’t need to learn to pick battles and prioritize efforts and make economic choices. They live these needs every single day of their lives.
David’s suggestions are only steps that the elite and privileged need to take as they typically have lived above such mundane things. They have been schooled in academia’s higher halls on a diet of art, philosophy, and social science, where grand theory often holds more sway than reality. They are far removed from natural selection and survival, where theory often holds little meaning and even less value.

In many ways, people who live a more base life are better prepared to lead others, as they have lived the harsh realities of want and need and have not been enraptured by the non-reality of a life of plenty. The theory falls short when food is not caught, firewood is not cut, and shelter not protective, warm, and dry.

For the academic elite who now make up most of our professional political class, Mr. Brooks is perfectly correct. They need some lessons on how things really work. They need to become acculturated to the lives, and I would say very existence, of others. They need to understand that a life of privilege and plenty is a vast difference from many Americans’ realities of survival.  They need to learn that suits, polished shoes, and manicures are a poor substitute for overalls, boots, and callouses when you need hard work done by hard men to build a road, protect a nation, manufacture a car, or drill for natural energy. I significantly differ from Mr. Brooks in the value of his first stated step — to apprentice at the feet of a seasoned politician — what he calls a master craftsman.

In applying the term “Master Craftsman” to politicians, I was struck by how far we have come as a nation. How we now so value the mere creation, manipulation, obfuscation, and codification of simple words so highly that we would apply a venerated approbation from the annals of hard work that signified the attainment of valued tangible production skill achieved through years of study, practice, sacrifice and dedication to the sole pursuit of intangible and often worthless verbiage and complications.

Maybe the founding fathers had it right when they conceived of a nation governed by the citizen politician who did not find a comforting life on the back of the public. A nation of common people who led because they were called to do so. It is a nation of people who never received their livelihood because they led, but from their own businesses in their own communities deriving value by their own sweat and initiative.  Maybe it’s time to reassess our values and the qualification of who should lead. Time to rediscover the values of commitment and duty that should be inherent in our leaders. Time to recognize that when it comes to finding pragmatic, effective solutions, those who have lived close to existence themselves often have perspective and experience as to where true value lies and waste is harmful. Time to reassess the relative value of a manicure and the ability to obtain and wear a nice suit and shoes to that of overalls, boots, and callouses.

Perhaps we should elect a few people who really have separated the wheat from the chaff. If we did so, then we wouldn’t need to acculturate our politicians to understand real life.